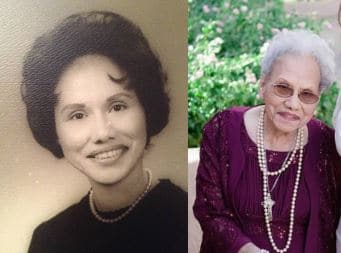 On November 13, 2021, our beloved sister and aunt Ernestina Cervantes, has been called “home” to join her parents and 9 other siblings. Ernestina was born in El Paso, Texas and moved to Phoenix, Arizona when she was 6 years old. Ernestina was a wonderful human being, who devoted much of her life to the service of others and the Catholic Church. Ernestina was a Eucharistic minister to the homebound, sick and incarcerated. She did this for many years. She also taught catechism in the preparation for first communion for hundreds of children over many years of service. Ernestina was very well known in the catholic community.

Ernestina will be greatly missed by those who knew her. She touched many lives in the 93 years of her existence. Anyone that knew Ernestina, would say that she was very kind, affectionate and warm. She loved being with her family and spend time especially with her nieces and nephews. Ernestina took pride in her work as a seamstress, she had a great eye for detail and helped create many beautiful designs for Aritogs.

A demonstration of her love for family was when she decided she needed to retire early, to care for her younger sister Esther, who was battling breast cancer. She cared for her for a couple of years, until she passed away. We will forever be grateful she was part of our family and will never be forgotten. Rest in peace our guardian angel.

Offer Hugs From Home Condolence for the family of CERVANTES, ERNESTINA